Nothing within this post is deliberately skewed however, I can understand how some readers might think so.  My writing is according to my perception of years of trying to understand, comments are welcomed. 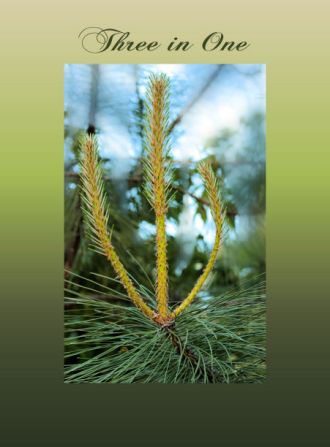 One day years ago, I noticed on meditating on the life of Christ, especially His passion and death during Lent. The number three was the number singled-out during the narrative. Although the Bible makes use of most numbers, it was apparent the number three was extraordinary. My reasoning was, the Trinity, why else I thought.
The Blessed Trinity defined; “And there are three who give testimony in heaven, the Father, the Word, and the Holy Ghost. And these three are one.”
[1 John 5:7]

When looking closely at the Ten Commandments, it was pointed out to me as a student in elementary school that the first three rules are directly related to God, while the other relates to life in general. Of course, they all connect to God, but the first three have a severe significant direct association.
Learning about the Sacrament of Baptism. One Baptism one Sacrament but in His Mercy, we see three powers.
“And there are three that give testimony on earth: the spirit, and the water, and the blood: and these three are one.”
[1 John 5:8]
Reading about His life, I noticed even before He was born the
mother of Jesus it is said, visited her cousin St. Elizabeth while He the Divine Child was incarnate in the womb of Mary.
“And Mary abode with her about three months; and she returned to her own house.”
[Luke 1:56]
Has anyone else ever recognized a particular verse in the Bible might have a double meaning, for example, this one when thinking about the three wise men who came to seek Our Lord at His birth; I liken with, (skewed, Hmmm!) … “And as Peter was thinking of the vision, the Spirit said to him: Behold three men seek thee.”
[Acts Of Apostles 10:19] Nevertheless there is that number three again.

Jesus at the age of 12, was thought-out to be lost by Mary His mother and foster-father, Joseph. They sought after Him with sorrow.
“And it came to pass, that, after three days, they found him in the temple, sitting in the midst of the doctors, hearing them, and asking them questions.”
[Luke 2:46]

Jesus at age 30 began His ministry, teaching those hungry for truth.
“I have compassion on the multitude, for behold they have now been with me three days, and have nothing to eat.”
[Mark 8:2]

His ministry lasted three years; at age 30.   He would be accused by three Annas, Caiaphas and Pilate.

“And he began to teach them, that the Son of man must suffer many things, and be rejected by the ancients and by the high priests, and the scribes, and be killed: and after three days rise again.”
[Mark 8:31]

Matthew 26;34 Jesus says to Peter, “Amen I say to thee, this very night, before a cock crows, thou wilt deny me three times.”

Continuing now into the garden. Book of Mark Chapter 14
The agony in the garden Jesus took three, Peter and the two sons of Zebedee equalling three.
And when he returned, he found them again asleep, (for their eyes were heavy,) and they knew not what to answer Him.
And he cometh the third time, and saith to them: Sleep ye now, and take your rest. It is enough: the hour is come: behold the Son of man shall be betrayed into the hands of sinners. Rise up, let us go. Behold, he that will betray me is at hand. And while He was yet speaking, cometh Judas Iscariot, one of the twelve

Jesus suffered while three nails pierced His hands and feet, He fell three times on His way to Calvary. Hung on the Cross for three hours, and died at 3:00 according to Mark 15:25.  His age was 33.

I am reminded of the three woes!
“And I beheld, and heard the voice of one eagle flying through the midst of heaven, saying with a loud voice: Woe, woe, woe to the inhabitants of the earth: because of the rest of the voices of the three angels, who are yet to sound the trumpet.”
[Apocalypse (Revelation) 8:13]

Three were crucified together on Calvary.

Three people only at the foot of the Cross when He died. I think of these words with multiple meanings as the inspired word seems to have. Could this be a prefigurement?
“And Peter answering said to Jesus: Lord, it is good for us to be here: if thou wilt, let us make here three tabernacles, one for thee, and one for Moses, and one for Elias.”
[Matthew 17:4]

The Church begins! “They, therefore, that received His word, were baptized; and there were added in that day about three thousand souls.”
[Acts Of Apostles 2:41]

Thank you for reading my post here on WordPress.

This site uses Akismet to reduce spam. Learn how your comment data is processed.