I see with my mind’s eyes, God-given rights threatened!
History is changing from what was to now dismay. War, we are in it!
Peace jeopardized! Why?
Anti-Christ is here, and the stage is being set.
These actions are plain “goofy” and are meant to destroy America.
Don’t believe me? Watch and pray; don’t waver back and forth!
They, those who envy peace and prosperity, are your enemy!
Is this what you want for your children? 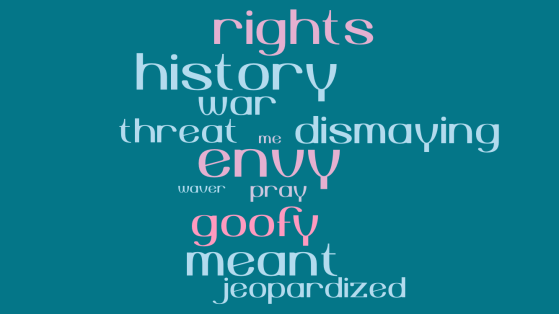 The delay of A WAR or THE DELAY of Gods chastisement, WHAT NEXT?

The Delay — Know that we almost had a WAR on our hands A FEW DAYS AGO; know too that Wars are a punishment for the sins of the world. God does not create them He allows them because of the sins of mankind.  Just to name a few: Abortion the killing of a tiny, precious infant, and who knows what this little baby would have contributed to the world?  Now infanticide — immorality everywhere — The world has lost their sense of sin — breaking of the First Commandment mainly — children not knowing if they are girls or boys!  On and on and on!

Look up the miracle of the sun that occurred just a little over 100 years ago, it was written about all over the world even in more recent times as in, yes,  (decades ago; I read it myself as a young adult)  in the National Geographic publication.

You won’t read these past accounts or events anymore or hear a reminder from the media, because TODAY the world is on a THE slippery slope of decadence.

The question IS:   Have we hit the bottom yet with our morals?  Hear this, The Message of Fatima, and in particular, the Third Secret reveals the Great Chastisement by which God will punish the whole world for the crimes of sinful humanity if people do not repent and stop offending God. On October 13, 1917, at Fatima, at the moment before the great Miracle of the Sun, the Blessed Virgin said, “People must
amend their lives and ask pardon for their sins. They must not offend Our
Lord any more for He is already too much offended.”

Time short; take an inventory of your mindset!  Know the Ten Commandments of God!

Are we nearing the END? How long will the END be? I wonder!

“For they are the spirits of devils working signs, and they go forth unto the kings of the whole earth, to gather them to battle against the great day of the Almighty God.” [Apocalypse (Revelation) 16:14]

Looking at the condition of the world we live in; so-called Christians calling for abortion and now infanticide, both are evil. A person who should be our role models defending evil as Pelosi does when she objects, and to make it worse, in the name of Go, to groups such as MS 13 being called for what they are “evil.” Woe to you that call evil good, and good evil: that put darkness for light, and light for darkness: that put bitter for sweet, and sweet for bitter.” [Isaias (Isaiah) 5:20]

Yes, we are at WAR, a Spiritual War, the battle for good or evil!  It is time for those whose consciences are speaking; stand up and fight for what you believe!

One factor for sure is, His Church, One, Holy, and Apostolic has adapted to the world. We were warned this would happen and it did with Vatican II. The infiltration of the Vatican that wrought the dumbing down of religion, the adaption to the world.

When God has had enough, I hope He finds you on the right side of this Spiritual War, the winning team. It is said, through His Saints prophesies that God will, for a while, let evil have its day. In the end, we know the end of the story. That will be a delicious time to be alive.

You don’t believe in God, you say! YOU WILL!

Yesterday was the Feast Day of St. Michael.  Years ago this true story was told on the radio and those who were privileged to hear it was impressed.  Since then it has appeared in various places; many of you I feel have already heard this inspiring story.

A young Marine named Michael who wrote a letter home to his mother while he was in the hospital after having been wounded in Korea in 1950. A Navy Chaplain named Father Walter Muldy was given the letter, checked the facts and concluded what was in the message was true. A year later he read the letter in public for the first time, to a gathering of some 5,000 Marines at the Naval Base in San Diego. Here is the letter:
Dear Mom,

I wouldn’t dare write this letter to anyone but you because no one else would believe it. Maybe even you will find it hard but I have got to tell somebody. First off, I am in a hospital. Now don’t worry, you hear me, don’t worry. I was wounded, but I’m okay you understand. Okay. The doctor says that I will be up and around in a month.

But that’s not what I want to tell you.

When I got to Korea, I prayed even harder. Remember the prayer that you taught me? “Michael, Michael of the morning, the fresh chord of Heaven adorning,” you know the rest of it. Well, I said it every day. Sometimes when I was marching or sometimes resting. But always before I went to sleep. I even got some of the other fellas to say it.

Well, one day I was with an advance detail way up over the front lines. We were scouting for the Commies. I was plodding along in the bitter cold; my breath was like cigar smoke.

I thought I knew every guy in the patrol when along the side of me comes another Marine I never met before. He was bigger than any other Marine I’d ever seen. He must have been 6’4″ and built in proportion. It gave me a feeling of security to have such a body near.

Anyway, there we were trudging along. The rest of the patrol spread out. Just to start a conversation I said, “Cold ain’t it.” And then I laughed. Here I was with a good chance of getting killed any minute, and I am talking about the weather.

My companion seemed to understand; I heard him laugh softly. I looked at him, “I have never seen you before, I thought I knew every man in the outfit.”

“I just joined at the last minute,” he replied. “The name is Michael.”

“I know,” he said and then went on, “Michael, Michael of the morning …”

I was too amazed to say anything for a minute. How did he know my name and a prayer that you had taught me? Then I smiled to myself, every guy in the outfit knew about me. Hadn’t I taught the prayer to anybody who would listen? Why now and then, they even referred to me as St. Michael. Neither of us spoke for a time, and then he broke the silence.

“We are going to have some trouble up ahead.”

He must have been in excellent physical shape, or he was breathing so lightly I couldn’t see his breath. Mine poured out in great clouds. There was no smile on his face now. Trouble ahead, I thought to myself, well with the Commies all around us, that is no great revelation. Snow began to fall in great thick globs. In a brief moment, the whole countryside was blotted out. And I was marching in a white fog of sticky particles. My companion disappeared.

“Michael,” I shouted in sudden alarm.

I felt his hand on my arm, his voice was rich and strong, “This will stop shortly.”

His prophecy proved to be correct. In a few minutes, the snow stopped as abruptly as it had begun. The sun was a shining hard disc. I looked back for the rest of the patrol; there was no one in sight. We lost them in that heavy fall of snow. I looked ahead as we came over a little rise.

Mom, my heart stopped. There were seven of them. Seven Commies in their full pants and jackets and their funny hats. Only there wasn’t anything funny about them now. Seven rifles were aimed at us.

“Down Michael,” I screamed and hit the frozen earth.

I heard those rifles fire almost as one. I heard the bullets. There was Michael still standing. Mom, those guys couldn’t have missed, not at that range. I expected to see him blown to bits. But there he stood, making no effort to fire himself. He was paralyzed with fear. It sometimes happens, Mom, even to the bravest. He was like a bird fascinated by a snake. At least, that was what I thought then. I jumped up to pull him down, and that was when I got mine I felt a sudden flame in my chest. I often wondered what it felt like to be hit, now I know..

I remember feeling strong arms around me, arms that laid me ever so gently on a pillow of snow. I opened my eyes, for one last look. I was dying. Maybe I was even dead; I remember thinking well, this is not so bad. Perhaps I was looking into the sun. Maybe I was in shock. But it seemed I saw Michael standing erect again only this time his face was shining with a terrible splendor. As I say, maybe it was the sun in my eyes, but he seemed to change as I watched him. He grew bigger, his arms stretched out wide, perhaps it was the snow falling again, but there was a brightness around him like the wings of an angel. In his hands was a sword. A sword that flashed with a million lights. Well, that is the last thing I remember until the rest of the fellas came up and found me. I do not know how much time had passed. Now and then I had but a moment’s rest from the pain and fever. I remember telling them of the enemy just ahead.

“Where is Michael,” I asked.

I saw them look at one another. “Where’s who?” asked one.

“Michael, Michael the big Marine I was walking with just before the snow squall hit us.”

“Kid,” said the sergeant, “You weren’t walking with anyone. I had my eyes on you the whole time. You were getting too far out. I was going to call you in when you disappeared in the snow.”

“How’d I do what?” I asked half angry despite my wound. “This marine named Michael and I were just …”

“Son,” said the sergeant kindly, ” I picked out this outfit myself and there ain’t another Michael in it. You are the only Mike in it.

He paused for a minute, “Just how did you do it, kid? We heard shots. There hasn’t been a shot fired from your rifle. And there isn’t a bit of lead in them seven bodies over the hill there.”

I didn’t say anything, what could I say. I could only look open-mouthed with amazement.

It was then the sergeant spoke again, “Kid,” he said gently, “a sword stroke killed every one of those seven Commies.”